The latest addition in IdeaCentre line up is an all-in-one desktop computer — a first for Lenovo.

The new, sleek IdeaCentre A600 all-in-one features a 21.5-inch frameless screen, and provides discerning space-conscious and style-conscious users a modern design that measures only one inch at its slimmest point, making it one of the slimmest all-in-one desktop. Thanks to its specification and design, its a pretty good machine for multimedia enthusiasts. The desktop boast 16:9 aspect ratio screen for cinema-like viewing and support for 1920×1080 full HD resolution, integrated speaker system includes a bass sub-woofer and Dolby Home Theatre audio certification, Blu-ray player, a digital TV tuner for watching and recording TV programs, and Microsoft Vista Media Center for easy recording of TV programs and interactive navigation between videos, music and TV programs. 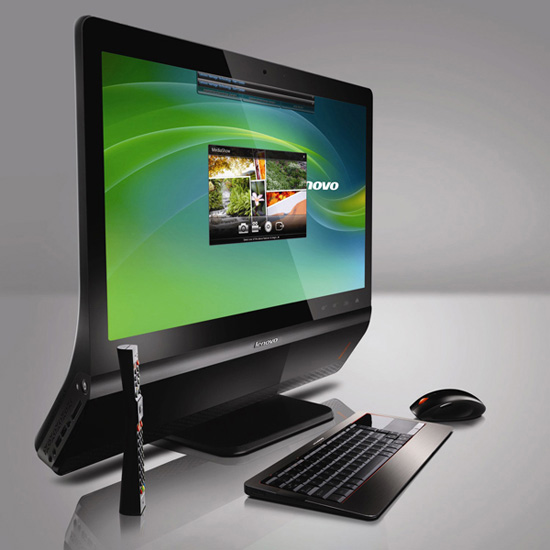 Another interesting feature of this computer is its 4-in-1 remote controller. It is the first to bring PC users the ability to play games using the remote control’s ‘motion drive’ feature, which controls on-screen objects according to the movement of the remote.

Unlike other remotes, the Lenovo 4-in-1 remote controller can also be used as a VOIP handset to make and receive phone calls over the Internet, similar to a typical cordless telephone. The remote also serves as a media center/TV remote, and with Microsoft Vista Media Center users can use the controller to operate DVDs, movies and TV. Additionally, the remote functions as an “air mouse” so it can be used to operate the cursor on the screen.

At the core of the all-in-one is a powerful desktop computer with choices of Intel Core 2 Duo processors, ATI Radeon graphics card technology with DirectX10 support, up to 4GB of fast DDR3 memory, up to 1TB (1,000GB) of hard drive space, WiFi, a 6-in-1 media card reader, side-mounted USB and FireWire ports with additional USB ports on the rear of the panel and VeriFace facial recognition technology which allows users to use his or her facial image as the log-on password.

The IdeaCentre A600 all-in-one desktop will be available beginning in April starting at $999.