Lenovo announced three new desktop PCs aimed at satisfying the computing appetites of the entire family. First on the list is the IdeaCentre K220 desktop, an all around, top-flight performer that runs 16 percent faster than the previous generation IdeaCentre K210 desktop[1]. The IdeaCentre K220 desktop comes with Intel® Core™ 2 Quad processors[2], up to 4GB of DDR3 memory, supports high definition graphics and DX10 as well as an optional Blu-ray Disc™ drive. All these features make for an explosive interactive and entertainment computing experience.

The IdeaCentre K220 desktop features Lenovo’s signature VeriFace facial recognition technology, allowing each member of the family to use his or her facial image as the log-on password. A web camera and monitor, purchased separately, are required for VeriFace functionality. The K220 desktop also has Bright Vision technology that helps to reduce eye strain. Bright Vision automatically adjusts the screen’s brightness based on the user’s proximity and surrounding light conditions. Bright Vision utilizes the Bright Vision software and a Bright Eye camera that can be attached to one of two Lenovo monitors that are purchased separately[3]. Lenovo includes the software and camera package on select models. 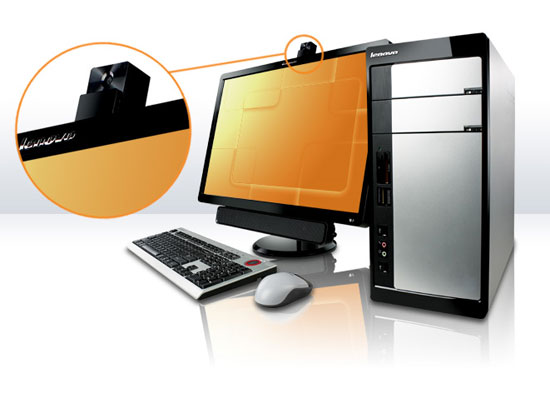 The IdeaCentre K230 desktop adds to the new consumer desktop portfolio as a logical choice for a powerful desktop with high-end, memory-demanding functions such as 64-bit Windows Vista and up to 8GB of DDR2 memory. Lenovo designed the K220 desktop to be ideal for watching video and equipped the K230 desktop for both editing and watching video. The IdeaCentre K230 desktop features an Intel® Core ™ 2 Quad processor[4], an optional Blu-Ray Disc™ drive and optional support for high definition graphics and DX10[5].

The Lenovo H200 desktop rounds out the lineup as a low cost and high value PC designed for customers on a budget who need to read email, browse the Internet, view pictures and video and perform other basic computing applications. The H200 desktop is Lenovo’s first desktop to utilize the low power Intel®Atom™ processor. Additionally, the H200 desktop features a fan-less design, helping make it Lenovo’s quietest consumer desktop.

The IdeaCentre K220, K230 and Lenovo H200 desktops include the Lenovo Rescue System, featuring OneKey™ Recovery, a tool used to recover information and restore the system without losing files.

Pricing and Availability[6]
The IdeaCentre K220 and K230 desktops start at $449 and $499, respectively. Both will be available beginning January 20. The Lenovo H200 desktop comes bundled with the ThinkVision L195 Wide LCD monitor and starts at $399.99 beginning January 10. The desktops will be available through business partners and www.lenovo.com.