Lenovo are billing this as a productivity booster, with an extra 39-percent of space on offer. As with the original W700, the w700ds has an onboard 128 x 80 cm palmrest digitizer, optional RAID and up to an Intel Core 2 Quad Core Extreme QX9300 2.53GHz processor with 12MB of L2 cache. 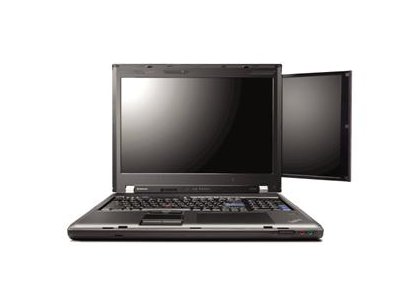 The dual-screen model weighs 4.96kg with one hard-drive, compared to the single-screen model at 3.83kg, and both have WiFi a/g/n, Bluetooth, dual-link DVI, gigabit ethernet, five USB 2.0 ports and three Mini-PCIe slots (two full-sized, one half-sized). Although pricing has not been officially announced, early indications suggest that the preconfigured W700ds will hit the $6712 and $5632 price-points.